The Pillar of Fire and Cloud on the Tabernacle is The Presence within the Holy Mishkan of the Hebrew God YHWH with his Psychoactive Nation, Manifest through Smoke and Fire of the KANEH BOSM…

InI have been meditating on this since past Sabbath parsha (#23 pekudei). The presence of Jah was manifested as a cloud over the tabernacle by day, and a pillar of fire by night. InI read Isaiah 18:4 today – For so YHWH said to me, “I will take my rest and consider in my dwelling place like a clear heat on herbs, and a cloud of dew in the heat of harvest”

The dwelling place of YHWH is the Tabernacle. Here dwelling place is the Heb. ‘makown’ from the root ‘kuwn’ which means ‘to exist, to be, to stand’ like standing as a pillar, erect. This is the root from where we get the name Jachin (YAH’KUWN) one of the two pillars on the porch of Solomon’s temple (the other called Boaz or ‘fleetness/swiftness’). ‘Makown’ is a fixed or established place, a foundation. In the Arabic it is ‘makaan’ esp. used of the habitation or dwelling of God. In Swahili the word is ‘makaani’ used for mosques.

A Cloud of Dew
This is a deep meditation. Clouds are connected to angels, and much more, they are synonymous with the obscurity of YHWH, being that he resides in a cloud of thick darkness that is impenetrable to anyone who is not perfectly holy. In this passage, the ‘cloud’ is Heb. ‘Ab’ – Darkness, cloud, or a thicket. In the concordance entry ‘Ab’ is described as an architectural term!

The cloud describes the threshold or the steps by which one goes up to a porch. Jachin and Boaz are the pillars of the temple porch. They are the two experiences of transcending the thresholds of consciousness into the Mishkan state of mind – the templmind – from profanity to consecration or Kristos.

The root of ‘Ab‘ is Heb. ‘UWB‘ which is ‘to wrap round, cover with darkness, to obscure, to treat with indignity’ (in English we say we are ‘keeping somone in the dark’ , akin to hoodwinking someone). It has an Arabic equivalent ‘Ayiib’ – this formed the Swahili ‘Aibu’ meaning shame, dishonour or self restraint through fear of invoking shame on oneself. I was once told by a Swahili that people needed Aibu to control their ambitions and keep them humble. Aibu is used commonly to describe the state of conduct by a woman who veils herself in a hijab or a man in his Islamic garments. Essentially the “veil is on the eyes” on the one wrapped in ‘UWB‘; ignorance is a cloak of indignity. Heb. UWB is used in Lamentations 2:1. The derivatives mean ‘a cloud’. Cloudy, foggy… these are all psychic terms meaning ignorance: anyone got a “Foggy memory”? “Clouded” judgement? A “dim” wit? Head “in the clouds”… even the cloudiness in a crystal ball recalls UWB. Clouds are associated with veiled secrets, mysteries. You cannot look through clouds, although they are made from water, and they can be thick enough cover mountain tops. The only thing that evaporates them is light: the illumination of the sun.

AB is used again to describe Yah’s cloud covering over the tabernacle in Exodus 19:9, ‘thick cloud’ or AB ANAN the obscurity of YHWH, connected to the principle of divination – The Divine Nation – but always ANAN is in the sense of sorcery or some kind of magick (for lack of a better word in English).

Psalm 78:23 – Though he had commanded the clouds from above, and opened the doors of heaven…

YHWH expresses that he his hidden in clouds again 2Samuel 22:12 – And he made darkness pavilions (sukkah/succoth/tents) round about him, dark waters, and thick clouds (AB) of the skies.

And Psalm 97:2 – “Clouds and darkness [are] round about him: righteousness and judgment [are] the habitation of his throne.”

And also Daniel 7:13 – “I saw in the night visions, and, behold, [one] like the Son of man came with the clouds of heaven, and came to the Ancient of days, and they brought him near before him.”

The clouds symbolize the presence of God, covered in obscurity (just as the sun is surrounded by comparative darkness, Jah is surrounding by thick clouds of ignorance/darkness as He IS perfect Truth/Light) and surrounded by His angels/army/nation who are called clouds. The angelic nature of Kaneh Bosm (Cannabis) is evident. It was used as a principle spice in the Holy Anointing Oil of the Levitical Priesthood. Gentiles still say we’re ‘Getting high’ when we smoke it; we ascend the steps of the Davidic porch in doing so (as the thoughts, ascending to the higher heights and iyrie iytes of Jah) and enter through the door of the inner mind, pushing aside the curtain veiling YHWH and meeting with Him where he dwells in the Holy of Holies in His tabernacle (our own bodies). Just as the priests who pushed that curtain aside without the proper cleansing and preparation to come into YHWH’s presence were struck dead, InI are to avoid bad trips within the mind by watching out steps to those heights by coming in with a clean conscience, or an atoned soul.

In Neh 3:15 steps are called MA’ALAH and in the concordance this describes ‘what comes up in thoughts’. Mankind descends to hell or ascends to irie ights with their thoughts!

MA’ALAH comes from ALAH meaning ‘to go up, an scent, a lofty place, a stage, a platform, a hill’.  There is connection here with David and Solomon’s Song of Degrees (Psalms 120-134). The thoughts are the steps to perfection, to perfect yoking with Christ’s mind, Christ consciousness. The door of the mind is opened by the one holding the Key of David (Rev. 3:7, Isaiah 22:22).

SUBLIME SMOKE AND “THE GATEWAY DRUG”

Divine = sublime. So what is subliming?

‘Sublime’ in a scientific sense means to bring a compound from the material form of a solid into a gas or into refined, powdered form; AKA “to get high” chemically. To move to higher form, from the earthly to the heavenly, is to sublime spiritually. Given that Kaneh Bosm (Cannabis) is only psychoactive when heated or vaporized or cooked or cured (being cooked by the sun), the worthy invoking of fire and smoke of Kaneh Bosm incensin the mishkan tabernacle is powerful teaching.

Our God YHWH (the Consuming Fire) activates The Tree of Life – The Burning Bush to become hallucinogenic. So too without his Divine presence in us the Holy Spirit, WE ARE NOT PSYCHOACTIVE BEINGS. Without the Holy Spirit, we are not hallucinogenic people. Practicing Divine-Nation is impossible without Fire (Divinare means literally “to be inspired by a god”).

As the Urim and Thummim stones of the High Priests ephod and garments were pitch black until activated by Jah’s presence, our minds are clouded in AB ANAN,  the clouds of ignorance/unconsciousness/night; until he arises and shines FROM WITHIN US. 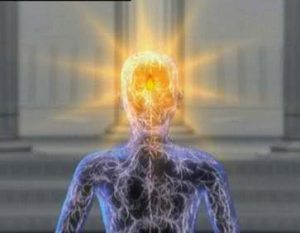 Berhane Selassie (AKA Bob Marley) the Light of the Trinity

To be continued…(P.t. 2 Sublime Door of the mishkan)