Haile Selassie in a grey suit parading along Swanston Street with Governor Rohan Delacombe (to His left side pictures below). The Emporer drove down Swanston Street and across Princes Bridge to Government House: 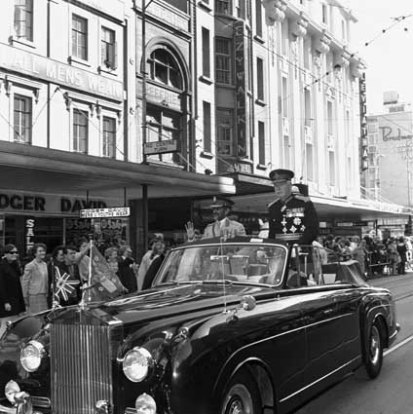 Even as an accident, this is symbolic photography. we warrant the assumption this was not ‘accidental symbology’ –  that very rarely happens in the case of monarchies- check out the store to the right of His Majesty, Jah is pictured outside of  ‘Roger David‘ (a famous department store in Australia). You were looking at the real King David Australia. It’s the Roger part that is really interesting, as that word has a varied etymology:

The use of the word ‘roger’ in radio communication to mean “yes, I understand” is attested from 1941, from the U.S. military phonetic alphabet word for the letter -R-, in this case an abbreviation for “received.” (Note: That correlates so much with Ethiopic ‘qebele‘ or ‘kebele‘ which is the root of Hebrew kabbalah “to receive”)

The slang verb sense of “to copulate with (a woman),” attested from 1711.
The Jolly Roger pirate flag is first attested 1723.

In this case, the name of that store behind His Imperial Majesty has a double meaning: either you ‘roger’ King David as His faithful soliders, receive H.I.M (SHEMA Israel and kebeleh-kabbalah HIM in Spirit and in Truth) or betray the Stone like the other builders of the cryptocracy involved here, who are pirates and are “rogering” King David –  the wicked responsible for the so-called ‘creeping coup’ are Illuminati usurpers (though they aren’t shapreshifting reptiles, they certainly creep like snakes). Don’t forget, His Majesty was betrayed by careless Ethiopians just six years after this picture was taken. Every picture tells a story, don’t it?

InI were also reasoning wether this this another jab at David by Saul with his spear (Saul was prone to throwing his javelin at David in fits of jealous rage), in jealousy that the power of Jah’s blessing/anointing had shifted onto David. Is there a correlation? There is a connection between Britain and Ethiopia and the House of Saul and House of David that InI would like to reason on in the coming blog.

Psalm 46:9-10 He maketh wars to cease unto the end of the earth; he breaketh the bow, and cutteth the spear in sunder; he burneth the chariot in the fire. Be still, and know that I [am] JAH: I will be exalted among the heathen, I will be exalted in the earth.

The LORD of hosts [is] with us; the God of Jacob [is] our refuge. Selah!