As many Christian denominations and sects are still waiting for Jesus Christ to “return” to establish a ‘millenial kingdom’ on the earth, MMH sees great need in clarifying the exact identity of the Stone ‘cut without hands’ in the Book of Daniel, chapter two. 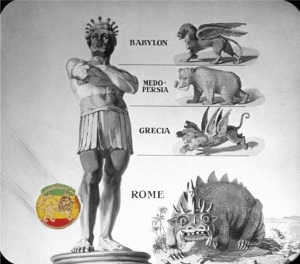 Remember Christ said: “Lo, I am with you always, even to the end of the (present) world!”

“The monarchy vision. Nebuchadnezzar’s dream, as interpreted by Daniel, gives the course and end of the “times of the Gentiles” (Luke 21:24, Revelation 15:14, note) that is, of Gentile world-empire. The four metals composing the image are explained as symbolizing (vs 38-40) four empires, not necissarily possessing the inhabited earth, but able to do so (v.38), and fulfilled in Babylon, Medo-Persia, Greece (under Alexander) and Rome. The latter power is seen divided, first into two (the legs) fulfilled in the Eastern and Western Roman empires and then into ten (the toes) (see Daniel 12:27 note). As a whole, the image gives the imposing outward greatness and splendour of the Gentile world-power.”
(Scofield Reference Bible, First Edition)

Let InI note: the British Empire is a continuation of Roman rule, as the Romans invaded and colonized the island of England. The most notable place of Roman presence remaining in in Bath, England. Romans constructed a Roman-bath here and the plumbing and pools remain in tact even now. His Imperial Majesty, as a refugee during the Italian invasion of Ethiopia, spent his five years of exile in the UK and his place of residence was in Bath! He ruled in the midst of His enemies AKA the Romans.

“The smiting Stone (2:34-35) destroys the Gentile world-system (in its final form) by a sudden and irremediable blow, NOT by the gradual processes of conversion and assimilation; and then, and NOT before, does the Stone become a mountain which “fills the whole earth” (cf. Daniel 7:26-27). Such a destuction of the Gentile monarchy system DID NOT OCCUR AT THE FIRST ADVENT OF CHRIST. On the contrary, He was put to death by the sentence of an officer of the fourth empire, which was then at the zenith of its power.

Since the crucifixion the Roman empire has followed the course marked out in the vision, but Gentile world-dominion still continues, and the crushing blow is still suspended. The detail of the end time is given in Daniel 7:1-28, and Revelation 8:1-19. It is important to see (i) The Gentile world power is to end in a sudden catastrophic judgment (see ‘Armageddon’ in Revelation 15:14, 19:21) and (ii) That it is immediately followed by the kingdom of heaven, and that the God of the heavens does not set up His kigndom till after the destruction of the Gentile world-system. It is noteworthy that the Gentile world-system begins and ends with a great image (Daniel 2:31, Revelation 8:14-15)”