Greetings in the name of the King of kings Qedemawi Haile Selassie I and His Christ, Yeshuwah HaMoshiyah.
The Mighty Trinity Selassie, Father, Son and Holy Spirit: One JAH. Barukh Atah Adonai! Ahadu Amlak!

Jesus Christ of Nazareth who you crucified….this is the stone which was set at nought of you builders, which is become the head of the corner. Neither is there salvation in any other: for there is none other name under heaven given among men, whereby we must be saved. Acts 4:10-12 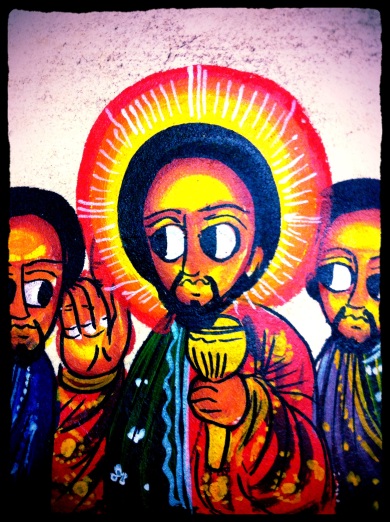 InI declare that the Stone the builders at UNESCO and the UN have refused is the Head Stone of the whole world and Kingdom of Jah which is New Jerusalem. They build bureaucratic Babylon, a socialist-Fascist world state of total micromanagement of mankind’s heart/mind, soul, spirit and body. If you think Satanism is freedom, you will enjoy the UN plan for your future. It looks very much like the Bolshevik genocide of Christian Russia, the hell of Nazi Germany, and Mussolini’s vision of Vatican control in Ethiopia rolled into one big corporatized machine of spiritual death. Make no mistake. We are monarchists but our monarch is not a Fascist. He is Holy Spirit royalty. He is the Conquering Lion of Judah. He does not force, coerce or colonize His subjects, we bow our will to His Will freely which is the Will of the Father of our Lord, Geta Iyesus Kristos. InI Rastafari want one world government but we want World Government of Jesus Christ’s Abba (Father) not the false UNESCO Alice A Bailey “Christ” or the Godless and Cruel Dragon Haile Selassie warned of. Fire pon de Vatican! Fire pon the Whore of Babylon! Woe to that MYSTERY. Blessed be those who hear (shema) the Word of Jah (His commandments) and do them.

Because Haile Selassie I confirms His Christ is the foundation of the New Jerusalem filling the whole earth, while the “New Age” spiritualists deny the only begotten Son of God in place of their ‘Cosmic Christ’ imposter devil. Haile Selassie willed to liberate His people from poverty, disease and ignorance not pull them into control through framing mischief by law.

“What we seek is a new and a different way of life. We search for a way of life in which all men will be treated as responsible human beings, able to participate fully in the political affairs of their government; a way of life in which ignorance and poverty, if not abolished, are at least the exception and are actively combatted; a way of life in which the blessings and benefits of the modern world can be enjoyed by all without the total sacrifice of all that was good and beneficial in the old Ethiopia. We are from and of the people, and our desires derive from and are theirs. Can this be achieved from one dusk to the next dawn, by the waving of a magic wand, by slogans or by Imperial declaration? Can this be imposed on our people, or be achieved solely by legislation? We believe not. All that we can do is provide a means for the development of procedures which, if all goes well, will enable an increasing measure and degree of what we seek for our nation to be accomplished. “New Way of Life” (2 November 1966).

Contrast this with the wisdom of Solomon’s son, who does not impose His Government on people with Fascist force. He walked out of His office gracefully instead of executing Mengistu Haile Maryam and the Derg Communists. Satan is an imposer, an imposter and the Kingdom belongs only to Jah.

The Lucifarian UN says: “The world will not change and find peace if there is not a new education.” (U Thant former Secretary-General of the United Nations, a teacher)

Haile Selassie I says “Today man sees all his hopes and aspirations crumbling before him. He is perplexed and knows not whither he is drifting. But he must realize that the Bible is his refuge and the rallying point for all humanity. In it man will find the solution to his present difficulties and guidance for this future action, and unless he accepts with clear conscience the Bible and its great message, he cannot hope for salvation. For my part I glory in the Bible.”

Muller is the Author of the World Core Curriculum, which is designed to “steer our children towards global citizenship, earth-centered beliefs, socialist values and collective mindset which is becoming a requirement for the 21st century workforce.”

[MMH note: it all looks pagan, and it’s all for the sake of economics. This is in contrast to what InI teach; we are not advocating Socialist values. We teach the brotherhood of mankind in Christ our Righteousness. There are two seeds on earth – one of the Serpent and one of the Woman or the Church of Jah. So InI are a brotherhood but certainly not partaking the collective mindset of the snake children. No thanks. We have the Mind of Christ.]

Haile Selassie I says: “However wise or however mighty a person may be, he is like a ship without a rudder if he is without God. A rudderless ship is at the mercy of the waves and the wind, drifts wherever they take it and if there arises a whirlwind it is smashed against the rocks and becomes as if it has never existed. It is our firm belief that a soul without Christ is bound to meet with no better fate. The love shown by our God to mankind should constrain all of us who are followers and disciples of Christ, to do all in our power to see to it that the message of salvation is carried to those of our fellows who have not had the benefit of hearing the good news.

“It is our conviction that all the activities of the children of men, which are not guided by the Spirit and council of God will bear no lasting fruits; they will not be acceptable in the sight of God. It will therefore come to naught as the tower of Babel came to naught. The grace of God is Eternal. Angels in Heaven and the Creation on Earth sing His Praise . We thank the Master of the world Almighty God. Power belongs to God. May God Our Creator, the Helper and Guiding Light of us all grant you His Wisdom that you may bear fruits for His Glory.””

Now InI want to highlight an often misoverstood or misunderstood so-called utterance of His Imperial Majesty at the Berlin conference:

“Since nobody can interfere in the realm of God we should tolerate and live side by side with those of other faiths. In the mystic traditions of the different religions we have a remarkable unity of spirit. Whatever religion they may profess, they are spiritual kinsmen. While the different religions in their historic forms bind us to limited groups and militate against the development of loyalty to the world community, the mystics have already stood for the fellowship of humanity in harmony with the spirit of the mystics of ages gone by.”

From a glance this appears to be the words of a Globalist who’s on board with the Illuminati agenda. Do not mistake H.I.M’s words.These are not H.I.M’s words. he is quoting another man, Sarvepalli Radhakrishnan.

Speaking on October 13th 1965, H.I.M awarded Sarvepalli Radhakrishnan an honorary doctorate from H.S.I.U in Addis Ababa. His Majesty was quoting the philosopher, not making a remark that advocates the esoteric Theosophy spiritualist world order. The real speech is this:

“This endeavor is in harmony with the spirit of the mystics of ages gone by, “In the mystic traditions of the different religions they may profess they are spiritual kinsman of loyalty to the world community, the mystics have always stood for the fellowship of humanity” so Your Excellency has taught us.” (Source Selected Speeches of H.I.M, page 182)

H.I.M is not denying the exclusivity of salvation in Yeshuwah. He is advocating the fellowship of humanity, which is the true way of evangelism that Christian people are to have. Unlike the colonial beast Britain, who invented Aparteid and who openly pressed racist bigotry even when pushing “Christianity” throughout its colonies and Empire, Haile Selassie I means to honor that spirit of fellowship of all man. Not fellowship with the works of darkness. Remember 2 Corinthians 6:14 ‘Be ye not unequally yoked together with unbelievers: for what fellowship hath righteousness with unrighteousness? and what communion hath light with darkness?’ Christ received gifts from Chaldean ‘Magi’ after His nativity in Bethlehem. And walked with the Samaritans. Christ also spoke with the pagan Romans. It did not means He allowed their idolatry, yet He did heal them and bless them with His power. The Son is in fidelity to the Father as the Father
has fidelity to the Son. Jah cannot deny HIMself.

So InI really wanted to open up the discussion, because ones are mistaking H.I.M’s utterances and words for globalist philosophy. Rastafari are world citizens because the whole world is the LORD’s all the fullness thereof! If the whole world is Jah’s and we are His sons and daughters through His Grace, then it’s our home. We have no need to join up with brain-wash Lucifarian indoctrination to become world citizens. We did that becoming baptised into the death and resurrection of the New Adam.

Babylon a beareaucracy. Babylon must impose herself through fuckry and snakecharming tricks because noone takes Babylon yoke without being decieved. Spells binding up the people through bad magic (UNESCO education system) and Jah knows, piping their music to control the minds of the youth.

More to come to this messy blog post. Reason on it. Shalom Rastafari