The link above is an interview discussing events surrounding the liberation of Black South Africans during the Apartied era. In 1962, former President Nelson Mandela secretly traveled to Ethiopia for military political and spiritual training under the name of ‘David Motsamai’.

The Ethiopian army, on the orders of H.I.M EMPEROR QEDAMAWI HAILE SELASSIE I HIMSELF, first trained and armed Nelson Mandela in his struggle against the Apartheid Government of South Africa. On the personal orders of His Majesty, the Ethiopian Colonel in charge of Mandela’s military training gave him a gun with which he was to bring down the ignoble and unhappy apartheid regime still thriving at that time in South Africa. Mandela went back to South Africa to continue his struggle. The rest is history. One of the things recently learned is that while he was in Ethiopia, the apartheid government knew where he was and had paid his minders to kill him. Captain Guta Dinka not only looked after Madiba while he was in Ethiopia, but was ordered to kill Madiba by Ethiopian and foreign agents. Prof Mamo Muchie translated. 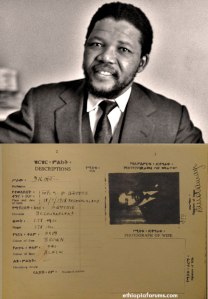